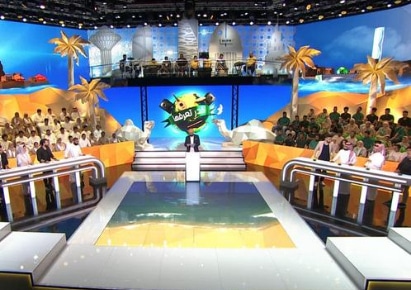 The media industry has rapidly evolved in Saudi Arabia ever since the country opened up to the new economic stream. The impetus increased when authorities decided to pump $35 billion to open 2,500 cinemas in the Kingdom.

There is a vast appetite for content – not just in its consumption but content creation has also moved to the top of the food chain. UAE-founded 7 Production is an early mover having been involved in Saudi for a decade.

The opening of Saudi Arabia has also led to more events and celebrities coming to the country, which has seen 7 Production get more involved. Even though it opened its studios in 2016 the firm has been in KSA for a decade involved in producing several events and TV shows.

The firm’s CEO Hadi Ghanem has previously acknowledged that early movement in the Kingdom has placed 7 Production in good stead, which is reflected in its ties with the government related productions. 7 was involved in the broadcast of the Saudi National Day where it had 25 crew members stationed, and over 100 staff present in Dubai to provide technical and creative manpower to address a large scale project of its kind.

But 7 has been involved in several outdoor and live projects as well. The firm used four OB vans to cover the King Abdulaziz Camel Festival that was held from January to February of this year. 7 has also been involved with the same event in 2017 and 2018. The Camel Festival hosts camel races and a beauty pageant.

“A single OB van consists of 16 cameras, two drones, two 4G wireless systems, and 3 EVS with 30 persons (technical and operation) for the Camel Beauty part of the coverage which goes on for 45 days. We design and build a studio there for one presenter and five guests’ from where we went live every day of the event,” says Tony Jabbour head of operations, 7 Production.

Another OB van is used for the camel race, which is also kitted out with speciality equipment as well. “The list in this van includes two cineflex, two drones, photo finish camera systems for result at the finish line, five wireless camera systems, six cameras with box lenses, commentator car, radio and terrestrial transmission, with crew of 40 persons (technical and operational). We are also able to build the graphics package using Vizrt,” Jabbour adds.

The signal is transmitted to all Saudi channels, throughout the GCC reaching a total of 23 channels.

Another OB handles studio duties where custom studios are built for race analysts that go live every night after the morning and the evening races. “We set everything up from scratch. Our teams didn’t only design the set but built it as well which includes lighting, props, furniture… we used 8 cameras there.

7 Production’s studio in Saudi was founded in 2016, and at 1,300 m2 was the biggest at the time of opening, a distinction it maintains until today. Since opening, the facility hasn’t been left idle with back-to-back studio bookings keeping the company on its toes.

Lara Ghanem, regional director, 7 Production says: “In a short time our Saudi studio has created quite a buzz, and the list of shows that have been produced here is a testament to that. The media landscape in Saudi and we foresee several local productions to take place in the Kingdom. Our clients, who choose to use our in-house gear, can avail our specialty studio equipment capable of capturing HD and 4K footage.”

For now 7 only has a studio in Riyadh – along with a studio each in Dubai and Lebanon. The company also operates in Jeddah, Dammam and several other parts of the Middle East. In terms of growing its business Ghanem says 7 has its hands full with plenty of existing bookings and engagements. “Despite our busy schedules expansion plans are firmly within our sites,” she concludes.