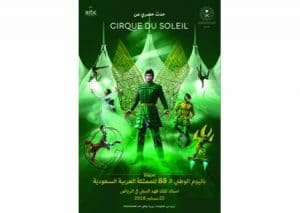 Saudi Arabia’s General Entertainment Authority presented one of the largest custom-made events by Cirque du Soleil to mark the 88th Saudi National Day on the 23 September. The event was organised by the MBC Group.

The production that was broadcast live by MBC1 took place at the King Fahd International Stadium in Riyadh in front of an estimated audience  of 27,000  reportedly making it one of the biggest Cirque du Soleil productions created for a customised event.

Presented on a tailor-made 85 x 40-metre stage, the production was a blend of the latest technological innovations in stagecraft, large-scale video projections, special effects, and fireworks with Cirque du Soleils signature style acrobatics.

Commenting prior to the historic production, Abdulrahman bin Nasser Al Khalifa, General Manager of Communications and official spokesperson of the General Entertainment Authority, said: “This upcoming Cirque du Soleil event will provide the Saudi audience with an enthralling international entertainment experience, mixed with locally-relevant content. This is part of the Authoritys efforts to attract and welcome the largest and most innovative entertainment and leisure companies to the Kingdom and facilitate business for them.These efforts are in addition to supporting a growing local sector, creating healthy competition between national companies to enrich the local entertainment scene.

On his part, Omar Al Radi, Head of Events at MBC Group commented (prior to the event): Organising such a phenomenal event is thanks to the ambitious vision of our country, which has instilled enthusiasm in the hearts of all of us, as we work on this extraordinary international event that is set to break records, and go beyond the international standards to celebrate the Saudi National Day like never before. We are proud to be part of Saudi National Day celebration and to be taking it to a global level as the show will be televised live with around 200,000,000 expected viewers from around the world

The visual theme of the King Fahd International Stadiums exterior was reminiscent of Bedouin tents. This design was explored on stage as well, thus creating a theatre within a theatre experience. Drawing inspiration from the visual culture of Saudi Arabia and harnessing the power of video mapping, large-scale projections whisked the audience away to a surreal world brimming with historical and geographical references as seen through the prism of Cirque du Soleil, the release stated.