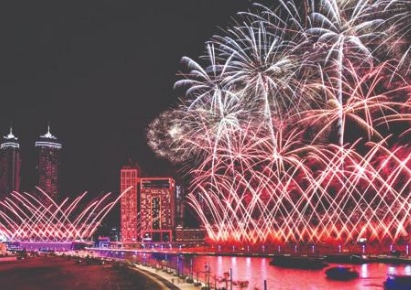 Dubai-based 7 Production became a part of history in the making with its coverage of the Dubai Canal opening ceremony as it brought spectacular images from the event to TV screens worldwide. Vibhuti Arora speaks with the men behind the scenes to find how they recreated the magic of the event for TV audiences

Dubai unveiled yet another man-made wonder in the heart of the city with the opening of Dubai Canal on November 9, 2016. The opening ceremony of the iconic site was a fittingly grand event with a stunning display of sound and light complete with breathtaking fireworks and live performances. Italian events company Prodea was in charge of the event and Dubai-based 7 Production filmed the opening.

7 Production was also responsible for covering the opening of the Dubai Opera, in October last year. That production was undertaken in 4K as it was not intended for live broadcast. The opening of the Dubai Canal, however, was a complete end-to-end HD production. In this scenario, perhaps one of the biggest concerns was being able to undertake a production in the midst of a large gathering while also ensuring that the security of dignitaries was not compromised.

The production covered the entire ceremony including aerial performances, laser displays, fireworks and a VIP tour of the canal on both water and land. The event was, therefore, divided into two segments to cover the performances and the VIPs, as well as the inauguration ceremony of the canal conducted by His Highness Shaikh Mohammad Bin Rashid Al Maktoum, Vice-President and Prime Minister of the UAE and Ruler of Dubai.

7 Production put together the production of the entire ceremony in a 50-minute programme broadcast on Dubai TV and its partner broadcasters worldwide.

Pierre Tabet, Managing Director of 7 Production, says the event was very demanding because of its stature and importance. There was absolutely no room for error because it represented Dubai to the world outside and was potentially a springboard of success for future projects for the production company.

The 2.7 billion dirham ($735m) Dubai Canal was inaugurated on the evening of November 9, amidst much fanfare and had several dignitaries and VVIPs in attendance. There was a live show and lots of grandeur around it, which had to be recreated for TV. So we treated it as two events rather than one in order to capture the essence of the ceremony. We had to make sure that not a single moment was missed. We had to deliver more than 100% and make this a success, he says.

40 cameras, both wired and wireless, were controlled by two OB vans and more than 140 crew were on-site to manage the show. The two OB vans were placed strategically along the length of the water canal at a distance of 3.5km, with one van acting as the hub that delivered the final feed to the broadcaster.

Planning was key, according to Commercial and Production Director Nabil Abou Samra, the in-house director. He covered the VIPs gathered for His Highness to announce the opening of Dubai Water Canal by lighting up the canal. Another director, Paul Van Koelen, was roped in from the Netherlands to handle the performances. Both were posted in different OB vans.

We filmed the VVIPs during the opening ceremony and as they toured the canal. The cameras placed on the boat also filmed the performances held in the canal, as well as the views from the launch of the waterfall and fireworks on the other end of the canal. A Steadicam was constantly following the VVIPs to capture their expressions and reactions during the show. I handled these camera feeds from one of the OB vans, while the other one had Paul, who took care of camera feeds that captured the laser and light shows, fireworks and live performances, says Abou Samra.

A large screen was also installed at the venue to showcase footage from the Dubai Creek opening from the 1960s and 70s. This was also an important part of the event and was covered as part of the inauguration by Abou Samra. It presented a mix of the old and the new with some shots from the live performances as well. Host broadcaster Dubai TV posted two reporters in the VIP area for interviews and commentary, and on one of the bridges over the canal, which were also filmed. Five SNG vans for main and backup feeds transmitted the signals to satellite for live broadcast.

The two signals were being received and delivered between OB 1 to 2 and OB 2 to 1. The vans also had intercom  both the vans could see each other and interact with each other as one single OB. While the fibre cable was the main transport mechanism between the two vans, there were two backups for this setup, one via SNG and the other through RF. We had three plans to secure our transmission and live feed.

Tabet further adds that multiple backups were required to make the production glitch-free and 100% reliable.

We couldnt risk it, so a number of backups were established.

It was not an easy job for 7 Production when the team started preparing for it four days before the actual ceremony. The canal was in the final stages of construction and a lot of loose ends had to be tied up on-site.

We couldnt disrupt the ongoing jobs and had to figure out ways to do our cable and camera setup alongside. The cameras had to cover the entire area yet they had to be deployed very discreetly. None of the cables could show either, so the entire broadcast setup had to merge with the background and not stand out, points out Tabet.

The canal was covered on all ends with 12 Vislink wireless camera systems installed on Sony cameras, with some of them on the bridges and on the boats as well as some strategically placed along the walkway.

Two helicopters were deployed with one Cineflex each for aerial footage. These were also equipped with two powerful Vislink wireless systems of five Watt each and covered a circular area of three kilometres around the canal.

Another vantage point that captured panoramic views of the canal and the ceremony was a camera from the top of the JW Marquis Hotel, a few metres from the canal.

An RF Relay was installed with antennas atop the 72-floor hotel, one of the highest buildings in the vicinity. This RF Relay system captured all the signals transmitted from the wireless camera systems, decoded them and multiplexed them into one signal. These were then sent back to the OB vans, where they were de-multiplexed and distributed to receivers to decode the RF signals and receive pictures from the various wireless cameras.

Having 12 wireless cameras on the premises that stretched less than 5km was a big challenge, says Jabbour.

There were far too many frequencies so we had to use filters with permission from TRA. Special RF spectrum analyser tools were used to scan the frequencies in this area and we were able to choose the best and the cleanest frequencies to avoid any disruption on our signals. As each wireless camera had to have a different frequency, we used 12 to 13 frequencies, he says.

Initially we were asked to provide different signals to different parties who would be present on the premises, but this didnt work out to be a viable option as the venue would have been too crowded in that case. So we decided against it and provided a single feed to the broadcaster, who then distributed the international feed from their end. The feed was in, adds Jabbour.

The production house had all the equipment required to cover the opening ceremony. A traditional OB setup was used in the production, although Jabbour points out that 7 Production is now readying for IP productions as well.

We have not used IP in our productions so far because the ecosystem is not yet ready for it. An IP setup in such scenarios is ideal but the infrastructure should support it. Also, the client should be ready to handle IP productions. There are several issues with IP, such as bandwidth, compression, cost and engineering, which require cross-functional skills and knowledge, he points out.

Jabbour believes that broadcast technology will eventually change the approach for many types of productions, creating new workflows, but the migration from SDI baseband to IP video routing/networking is imperative.

This coming NAB, I am expecting a lot of development in IP to make it a mainstream technology, he adds.

The production house is in the final stages of acquiring a 4K OB van, claimed to be the first-of-its-kind in the region, which will be capable of an end-to-end 4K production. Once ready, the OB van will be used for HD as well as 4K productions as the company gears up for 2020 and 2022 events.

We are equipped to handle seven big productions simultaneously, thanks to our vast inventory of equipment and our robust OB fleet comprising seven large and medium trucks as well as flyaway kits. We bought a few lenses for the canal opening for optimally capturing birds eye footage, says Tabet.

A key highlight of the Dubai Canal opening ceremony was the play of light and sound, which had to be captured in pristine quality for TV viewers to feel they were attending the event live.

Lighting can be a major challenge in filming. The lights have to be camera friendly, otherwise the footage, despite the best cameras and lenses, will not be up to the mark. We worked with the events company to use lights that were suitable for filming. The role of the camera operators is critical in doing this right. They should understand how the camera sensor and the lens will react when exposed to a certain type of light and adjust the cameras accordingly, to capture the right amount of light to produce quality imagery. Several mood lights were installed on-site especially for the event. We didnt change any of those and recreated the same effect on TV screens, Tabet says.

Its passion that drives us. With every new event, we learn something new. We were prepared for different scenarios because in live events rarely do things go as planned. We had covered the entire walkway where the sheikhs would walk and also provisioned to cover the area in case they decided to take a detour. As it happened, they did take a detour from the main path, but we had that covered too and did not miss any crucial moments.

The Dubai Water Canal opening led to many more opportunities for us. Our client RTA was extremely happy with the coverage. You can achieve anything with proper planning, and for this production we drew up a map of our entire camera network and the execution just fell in place. At the end of it, we produced a memorable event. In fact, we bagged another high-profile project as soon as this one was completed. 7 Production was contracted to cover the opening of the Etihad Museum with all the seven rulers of the seven emirates of the UAE, says Abou Samra.