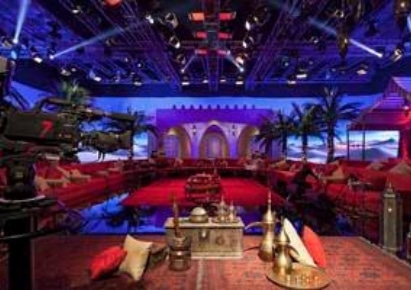 7 Production and Events has announced the successful completion of the filming of Al Jalsat, an Arabic TV show for a leading regional broadcaster, at its brand new broadcast TV studio in IMPZ.  In addition to renting out its studio with all of the filming equipment, 7 also managed the sound and lighting for the show, and executed the design and construction of the four sets required for the show.

We are very happy to have completed the filming of the entire show in a record 3 weeks, commented Pierre Tabet, Operations Manager at 7 Production and Events.

Adhering to budgets and tight deadlines are always top priority for network executives. By specialising in every aspect pertaining to broadcast, we have been able to completely streamline the process thereby allowing our clients to remain focused solely on their productions rather than on time-consuming technical details.

Filming involved the use of a wide range of cameras including steady cams, super slow motion, triple speed, lipstick, wireless cams and other specialty cameras along with the associated accessories such as an FX-Motion Robotic Camera System and a Jimmy Jib crane with a Dutch roll camera head, all of which were provided on hire by 7.

Though its sister company, Empire Interior Design, 7 was able to design and construct the intricate sets required for the show. The company also employed its state-of-the-art lighting controls, audio and visual control switchers, teleprompters, graphics systems and wireless talkbacks systems to manage both the sound and lighting for Al Jalsat.