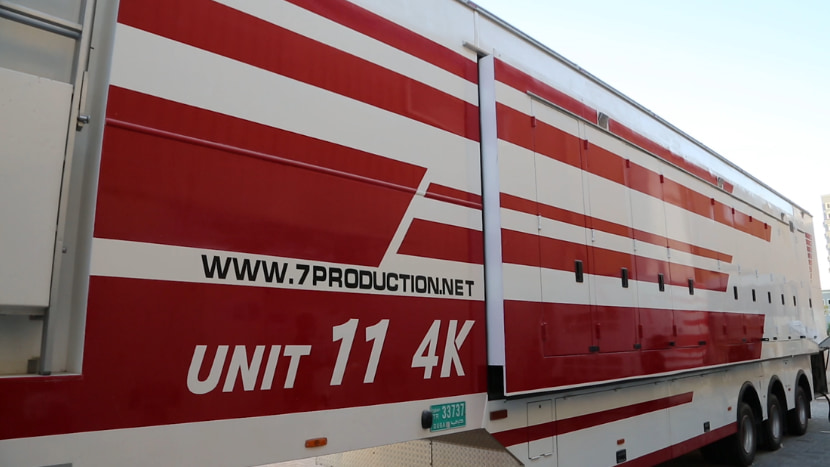 WITH A STRING OF STUDIOS, A FLEET OF CUTTING-EDGE OB TRUCKS AND A REPUTATION FOR INNOVATION WITHIN FILM AND BROADCASTING FOR TV, SPORTS AND LIVE EVENTS, SEVEN PRODUCTION HAS ITS SIGHTS SET ON CONTINUED EXPANSION THROUGHOUT THE MENA REGION AND BEYOND.

Established in Dubai in 2007, Seven Production has garnered a well-earned reputation over the years as one of the region’s leading innovators in film and broadcasting for TV and sports, as well as corporate and live events. With regional offices in Dubai, Abu Dhabi, Riyadh, Jeddah and Lebanon, as well as the UK and Finland, the company’s trademark blend of 4K and HD broadcast solutions as well as live event technical support is now seen on broadcast and events projects throughout the MENA region and beyond.

“Our promise to our client is to go above and beyond expectations through the delivery of customised solutions and outstanding results time and time again,” began Regional Director, Lara Ghanem. “We are sensitive to cultural differences and comply with all national regulations, and the ability to customise our offering based on client requirements ensures we deliver precisely what is demanded.”

Seven Production currently has over 10 studios located in Dubai, Riyadh and Beirut, with spaces ranging from 300 sq m to 5,000 sq m. “These can be customised to meet any production need,” Ghanem said.

Having been used for the likes of Masterchef Arabia, Top Chef Arabia, Arab Idol and The Cube, the soundproofed studios are offered on a dry hire basis, with additional services on demand including the hire of OB trucks, technical

The sports production arm of the business is based on the company’s fleet of OB trucks, which Seven uses to cater to a range of sporting events. With long-term clients including IMG UK, PROTV, Creative Edge and The UAE Camel Club to name just a few, Seven has built a reputation for its customisation and integration of technology and ability to adapt to the requirements of each different live event. “Our sports production and in-house broadcasting package typically includes the complete technical production and live coverage using a range of specialist equipment and 4K or HD camera facilities, as well as the technical personnel required to film and broadcast the event,” Ghanem commented.

The company’s OB trucks are also integral to the live events and corporate production sector, providing the ability to film anything from a small intimate event up to a major international conference or festival. “For a larger-scale event such as the Arab-Islamic American Summit, which took place in Saudi Arabia, the OB trucks involved needed to support and switch between 45-plus cameras, mix a large number of microphones, add graphics and replays, and generally package a complete programme for delivery to live broadcast,” Ghanem recalled.

In fact, the company recently upgraded to an end-to-end Grass Valley workflow for its latest 4K UHD OB truck. The first of its kind in the region, the new 12G 4K UHD OB unit is packed with Grass Valley’s end-to-end native 4K UHD workflow elements – including cameras, production switcher, routing and monitoring. “Sports fans in the Middle East want access to stunning images and rich content that bring them closer to the live action, and we are committed to giving our clients the power and capability they need to meet the demands of their audiences,” commented Ghanem. “By bringing the first 4K OB unit to the region, we can stay ahead of the market curve with the ability to serve our clients requirements today and tomorrow.”

Prior to the COVID-19 pandemic, Seven announced a landmark deal with MBC Group to cover the FIA Formula One World Championship worldwide – a first for a production house in the Arab world. “This project is testimony to our capabilities and the skill we are able to bring to the table,” stated Ghanem. “What we do helps put the region on the map in terms of production. Now we have proved that we, as a regional production house, can compete with international players, and this attracts more projects to the region.”

Of course, the pandemic has had a massive effect on the entire industry and Seven has been quick to adapt its offering with a range of virtual and hybrid solutions. “It was something

“We specialise in large-scale sports and entertainment events, and I can’t imagine an online event achieving the same level of excitement than physically being there.”

we never offered prior to the pandemic, unless a client specifically demanded to go hybrid,” reflected Ghanem. “During the pandemic and now for the future, we recognise the need to acknowledge this direction and move forward in it. We have already been incorporating it, as part of our growth strategy. It has been a very exciting experience, because we are a business that takes challenges like these head-on and invests in the right equipment to make things happen.”

A notable example of this direction was the company’s work on Incognito – a new game show that was filmed from eight different locations simultaneously. “The challenge at hand was to deliver zero latency in order to ensure seamless coverage and enhanced viewer experience,” Ghanem recalled. The feat was achieved using advanced satellite transmission and a satellite downlink in each individual location. “Everyone could see and listen to everybody involved in the show,” she added.

“The Seven Production OB van located at our base in Dubai was the main hub for the event, sending and receiving signals from all locations. With the seamless integration of advanced technologies, powered by a team of experienced professionals, Seven managed to secure the excitement, nail-biting adventure and thrill associated with a gaming event of this nature.”

As online and hybrid events continue to thrive in the region, Ghanem maintains that there will always be a place for live in this postpandemic world. “The advantages of online is that people can be globally connected – anyone, anywhere can watch an event, there is no time difference, nor distance issues. It has made the world a smaller place,” she commented. “However, you lose out on that physical human aspect of being at a live event; using all of your senses to experience an event is a whole different high. We specialise in large-scale sports and entertainment events, and I can’t imagine an online event achieving the same level of excitement than physically being there.”

Looking to the future, Seven Production is expanding rapidly in Africa and the MENA region, with upcoming projects in Madagascar, Libya and Tunisia among others. Aside from being called upon to film and broadcast live events, the company is also in the process of setting up future studios in these countries to film their national TV shows. Photos: Seven Production www.7production.net

Seven Production provides specialist filming as well as 4K Media Solutions customized for any LIVE event. Since 2007, Seven prides itself on being the broadcasting partner of some of the biggest Royal, Government and Corporate events that have taken place in the region. Seven’s fleet of Outside Broadcast trucks can be used to film and broadcast a range of small to extremely large event sizes including; Victorious, MasterChef Arabia and Arab Idol and we are the team behind major live events such as Dubai Rugby Sevens, Dubai Music Week, Chanel Fashion Show and most recently broadcasting the Formula 1 Abu Dhabi Grand Prix worldwide.