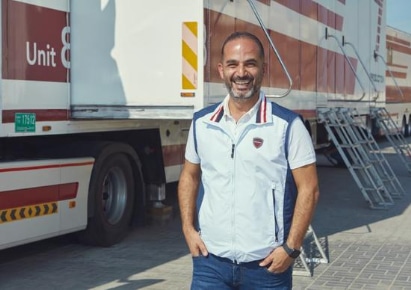 7 Production has set the pace when it comes to media production and delivery in the region. The Dubai-based independent production house witnessed a strong 2019 dotted with several feathers in its growing list of achievements.

By now 7 is relatively well-known for its coverage of the FIA Formula 1 championship, delivering its services to the MBC Group who won the MENA rights to televise the races to its audiences at the start of the last season. Prior to MBC, BeIN used to broadcast the F1 races regionally.

Every year the F1 season begins with the Australian GP and the spectacle concludes with the Abu Dhabi Grand Prix in November / December. In between the F1 juggernaut rolls to 19 other destinations around the world spanning Europe, Asia, the Middle East and the Americas.

7 Production worked hand in glove with MBC to make the race experience as viewer friendly as possible. “It was a great experience, Formula 1 is huge,” says Pierre Tabet, managing director, 7 Production. More details on 7 Production’s F1 journey later on in the article. Tabet takes time out of his busy schedule to share exclusive details of the company’s present and future.

We make our way to one of the company’s full HD outside broadcast (OB) trucks — 7 Production has the largest fleet of OB trucks in the region. “We are sitting in one of our biggest OB trucks, which is fully HD, and can hold up to 25 cameras. This truck caters to large live productions that include football, cricket — any big production,” Tabet reveals.

7 has tightened its grip over the live sports events and broadcast sector over the last 12-18 months. Apart from the aforementioned events, 7 was also involved in the Dakar Rally for the first time which took place this January.

“The Gulf is bound by sports — Formula E, football, camel and falcon races take place in every country. We do several events for the military; our facility is also used to film TV shows; and finally we are involved in concerts and events. We do a big chunk of daily concerts in Riyadh as well,” Tabet adds.

Meanwhile, the company’s growing prowess and specialisation in sports has drawn interest from other countries as well. Apart from the Gulf, 7 has been approached by countries in the African continent. Tabet reveals: “Africa is our next major frontier since there is a lot of demand especially with the rising interest in football broadcast across the continent. We have been approached and are currently studying the dynamic.”

7 is taking a holistic approach to expansion and is looking at fortifying its presence in existing markets as well. The firm currently has offices in London and Finland, “where it’s working to get a bigger share of the market” while it continues to expand in the UAE and Saudi Arabia.

Having referenced Saudi Arabia a few times already Tabet is a firm believer of major growth that the Kingdom has been touted for. 7 has invested a significant amount of funds in its Saudi operations, and while the move has paid rich dividends Tabet says it was challenging since 7 was an early mover in the Kingdom.

“We have seven studios in Saudi Arabia all of which are fully booked with shows that vary in size and production levels. Our studios range from 1,500 m2 to 5,000 m2 where we will be producing the next season of Top Chef for MBC. Previously 7 has worked on the production of Season 1 and Season 2 of Top Chef which was filmed in Dubai, for Season 4 we used our studios in Lebanon and now the focus is about to shift on Saudi.”

For 2020 a major development is 7’s foray into 4K making it one of the first to introduce 4K to the region. “We are going to introduce the flyaway pod and new 4K Ultra HD OB trucks to the market,” Tabet reveals.

The new trucks are kitted with state-of-the-art equipment. Tabet says: “We are going to be the leading and most innovative service provider for 4K. All the equipment in our trucks are kitted to meet 4K Ultra HD spec, which we can  upgrade with new equipment as and when it comes out.”

Meanwhile the company is also working on a custom ‘broadcast flyaway pod’. Tabet adds: “We are one of the first in the Middle East to introduce the pod to the market. It will replace the flypack system. The pod operates like an OB van but it’s a lot more versatile because you can transport it all over the world. At the moment our mission is to improve Formula 1 coverage, which the pod will help address. But we also be able to use it at several events and productions making our life a lot easier.”

The flyaway pod will also hold the firm in good stead for events such as camel races that are normally held in the dessert where trucks cannot traverse smoothly.

The broadcast flyaway pod is a direct takeaway from 7’s learnings of covering its first full season of F1. Tabet and his team spotted the pod being used by all major international broadcasters across the 21 races. “We want to serve MBC in the best way possible. The broadcast flyaway pod brings us up to speed to international broadcasters. The pod is triple expanding, similar to an OB van.”

7 did not have the pod for the 2018-2019 F1 season, its first full term of covering the races for MBC. The teams hence faced a few logistical challenges through the course of the 21 race weeks. Tabet notes: “The obvious challenge we faced was travelling from one country to another within a week.

We had to fly all the equipment and set it up in time for the race weekend. Every country has its own set of protocols and procedures.

“We had to adjust to major cultural differences in every country. We worked with freelance teams globally and had to adopt to crews from the country we were in. From the terminology to style of working — but most of all the means of communication was chaotic. After all is said and done we are passionate about our profession and speak the same language through what we do, everything came together.”

Six crew members travelled to all race venues from 7’s local offices in Dubai. Meanwhile creative specialists such as project coordinators and camera specialists were contracted from local markets where the races were being held. In all 7 had a team of 20 to 25 professionals at each race weekend production.

Responding to a question about the current market challenges, Tabet says it’s no different in the broadcast and media production space than the other sectors. Tabet notes: “Every business faces challenges in a market that’s ever-evolving, ours is no different to what the real estate market, for instance, goes through. To add to it our industry is a capital intensive for our clients and for us. We keep upgrading our equipment as well, which is imperative to maintain our position on the top.

“That’s evident with our recent investment. No one has the 4K UHD kit like we do, and we continue to invest heavily in it. As an independent company we are challenging the market while maintaing fair competition and prices — all this throws up a challenge which we welcome. It keeps us motivated and our clients satisfied.”

Tabet and his team will be taking a quick breather following a grueling 2018-2019 F1 season, and more recently the Dakar Rally. However there’s no time to rest as they get ready to do it all over again at the start of the 2020-21 season opener, at the Australian GP.

Finally Tabet has his sights firmly set on Expo 2020 and hopes to get in on the first truly global event for the Arab world. “There is huge opportunity with the onset of Expo 2020. We have a good relationship with the UAE Government and Dubai TV — who are expected to have a big part of Expo 2020 — we are their supporter. I believe everything is going to be in 4K and we are ready for that,” Tabet concludes.